Solidworks vs. Onshape - A Brief Overview 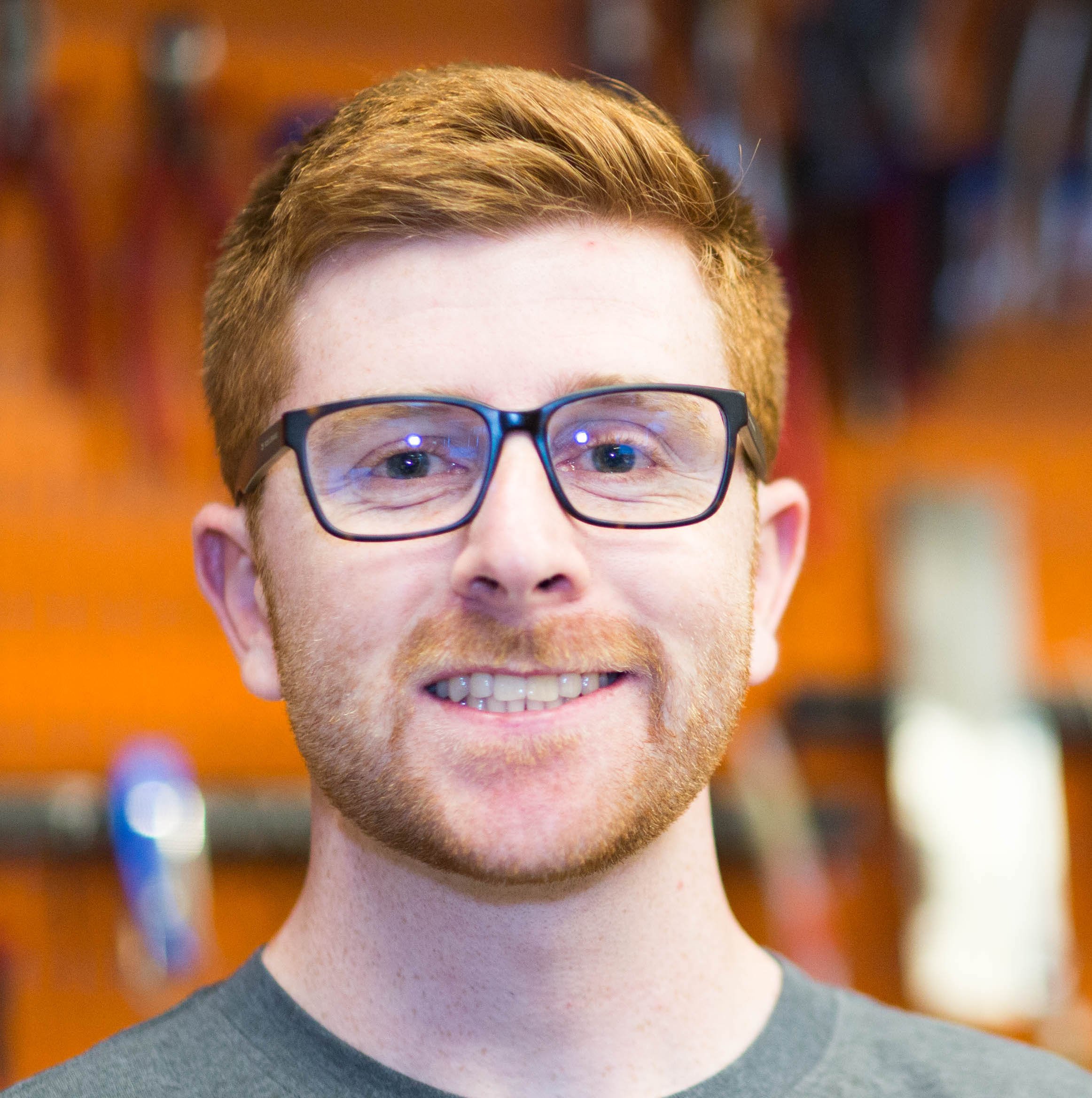 Solidworks vs. Onshape - A Brief Overview

At Boulder Engineering Studio, we have six full time mechanical design engineers who spend most of their design time using Solidworks. We also believe in using the best tool for the job. This means that we’re always trying to stay abreast of new tools in the design space and understand where we might be able to enhance our capabilities. One newer design tool on the market, used by some of our contractors and clients, is Onshape.

Here we provide a comparison of Dassault’s Solidworks and PTC’s Onshape computer-aided design (CAD) packages. This will be a broad overview of the most commonly used features of each program and is not intended as a deep-dive into the nuances of each software package.

To start, the best analogy we can use to describe the largest and most relevant difference between Solidworks and Onshape is to compare them to Microsoft’s Office and Google's G Suite, where Solidworks is akin to Office and Onshape is similar to G Suite. Solidworks, like Office, is primarily a dedicated application that is installed onto your PC and is often considered a more powerful tool when compared to cloud based alternatives (like G Suite). Onshape, like G Suite, is a cloud based application which requires an internet connection to be run through a browser but has the inherent benefits of existing on a shared access platform.

Again, Onshape Software is a CAD program that runs in your web browser, which means it can be used on a desktop, laptop, mobile phone, tablet, etc. Both programs have some immediate tradeoffs and benefits:

When creating a part or assembly in both programs, the starting page screens look similar. You get a top row feature bar and your basic set of 3 planes. The two environments are not identical but transitioning between them is fairly intuitive. The feature trees, as you’ll see, look and feel comparable. 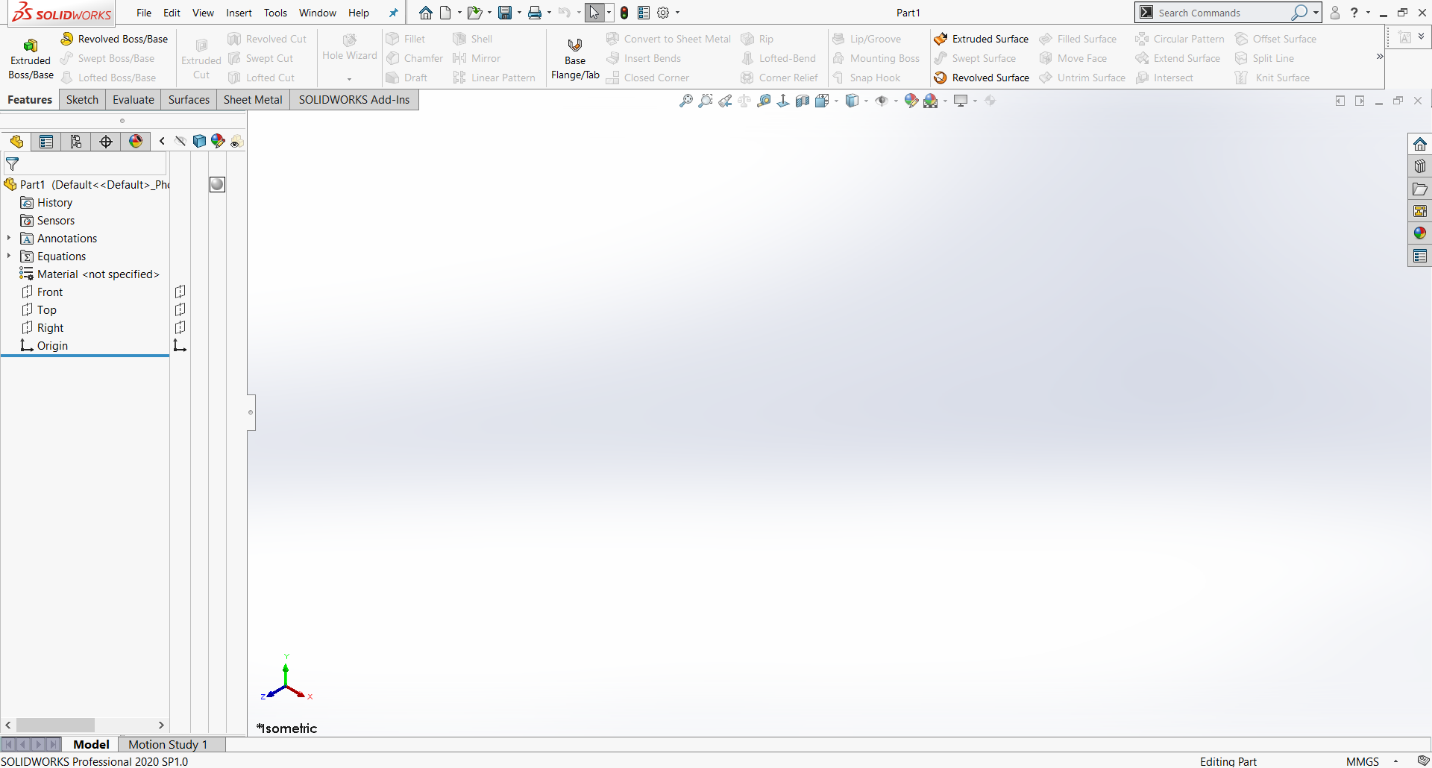 In Solidworks most of the features are separated out into their own selectable options. Whereas in Onshape most features are a layer or two deep. After you select the base feature in Onshape, such as extrude, you can select add or remove material. This allows for a less cluttered top row of options but has the potential for some difficulty finding the feature you are looking for.

Below are some screengrab comparisons of commonly used features. For mechanical engineers who use CAD, these should all be very familiar:

Within both programs, starting a sketch is very similar. If you’re accustomed to Solidworks, the workflow of selecting a plane and then drawing a 2D sketch on it will feel very “normal” in Onshape. 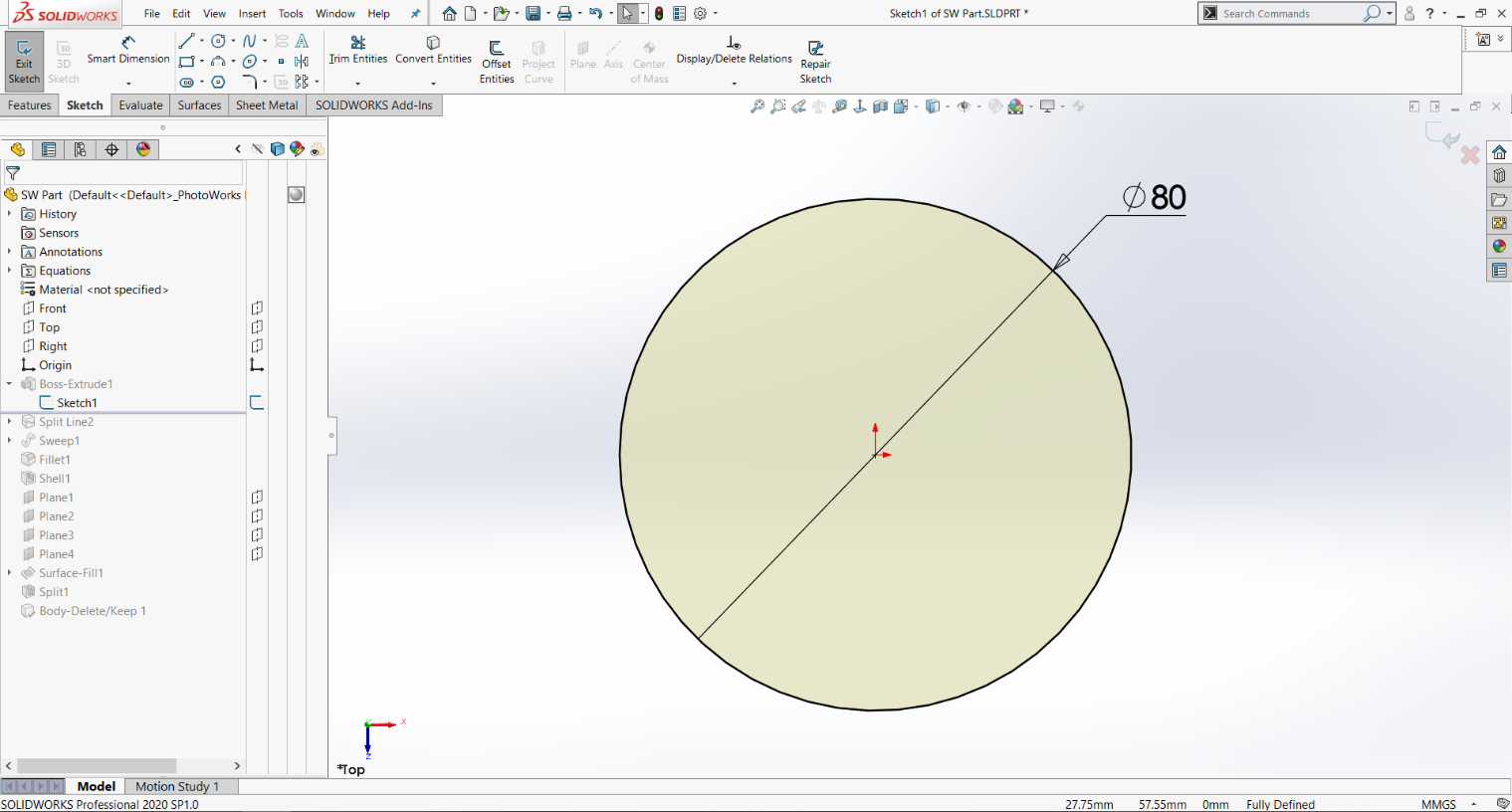 Your most basic function for adding material in a CAD program, boss-extrudes differ a little bit in these two programs. Both packages have fairly exhaustive Extrude options for ending in two directions with a face, vertex, with a draft, etc. but Onshape has also built the surface-extrude into their more singular tool. Solidworks gives the option of a thin-extrude (producing a 3D boss from an unclosed sketch) whereas that option is not available in Onshape. The same result as a thin-extrude requires two in-series operations in Onshape: surface-extrude and thicken. 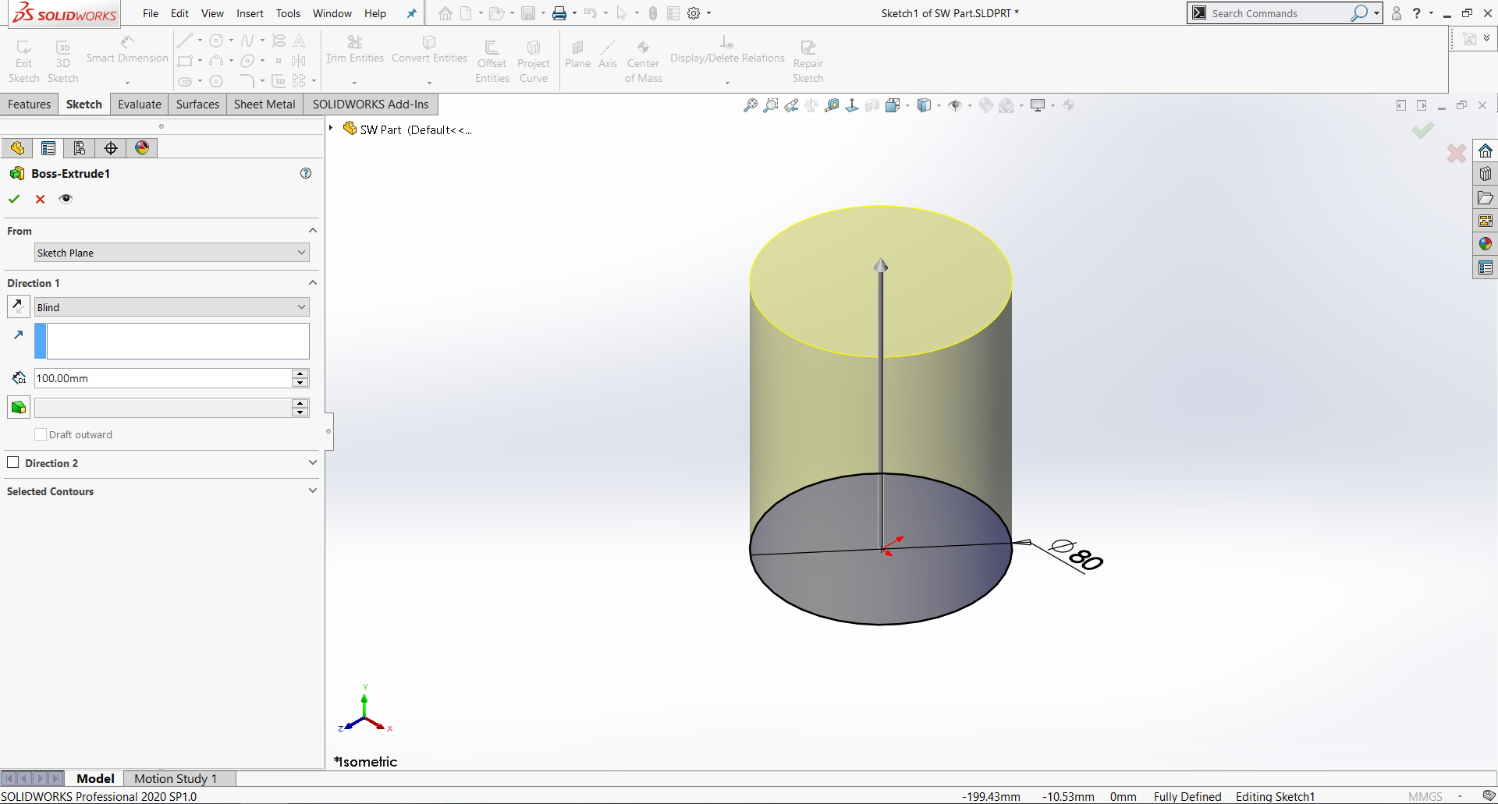 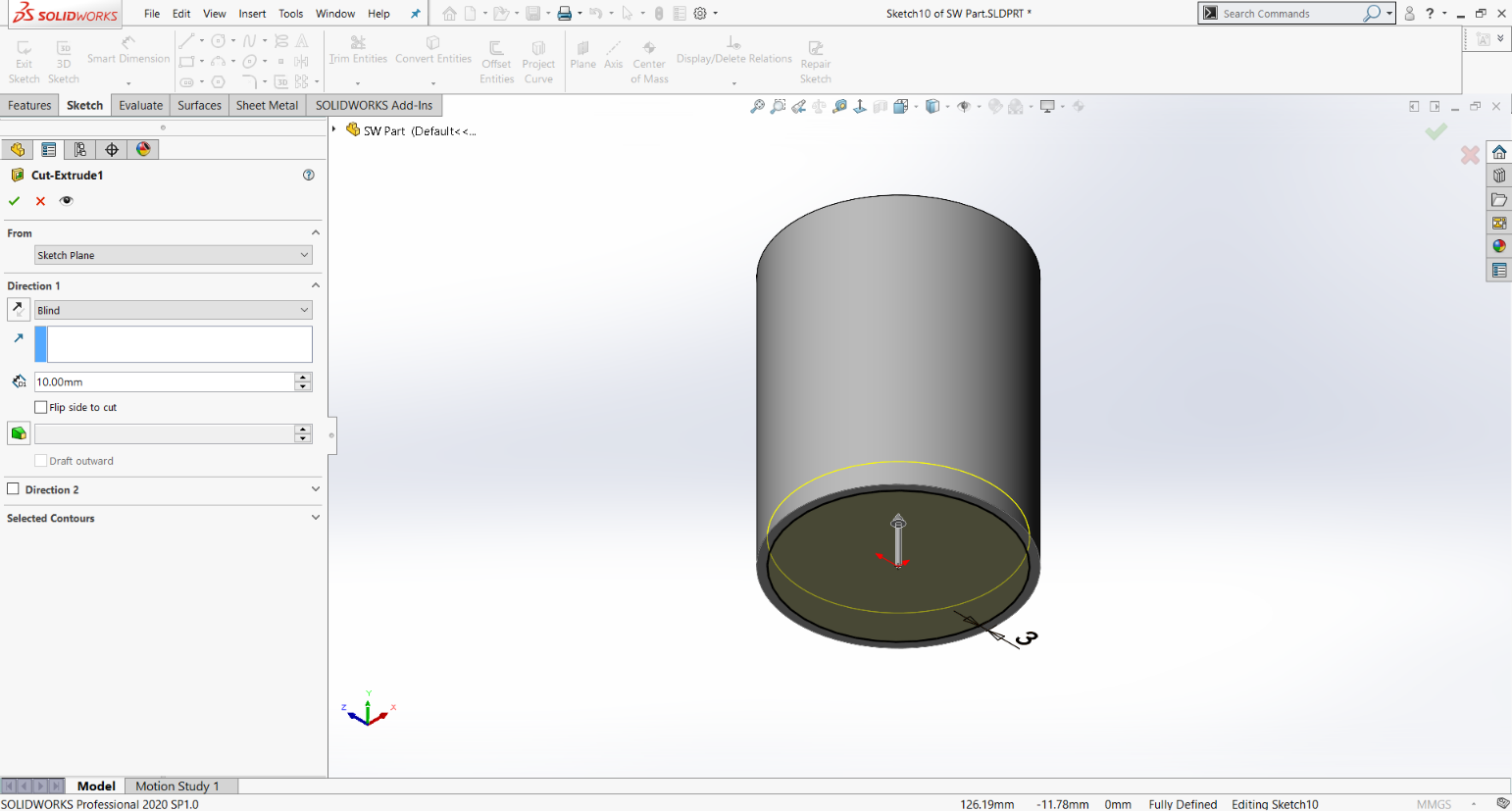 In our experience, Plane generation in Onshape is very similar to that in Solidworks but the software intuits a little less. In Solidworks, if you select two flat parallel surfaces, it will automatically select the “mid-plane” option to generate a plane between the two selections. Onshape doesn’t intuit this and makes you click through the menus a little bit more, but this makes things look less cluttered—not a big deal. 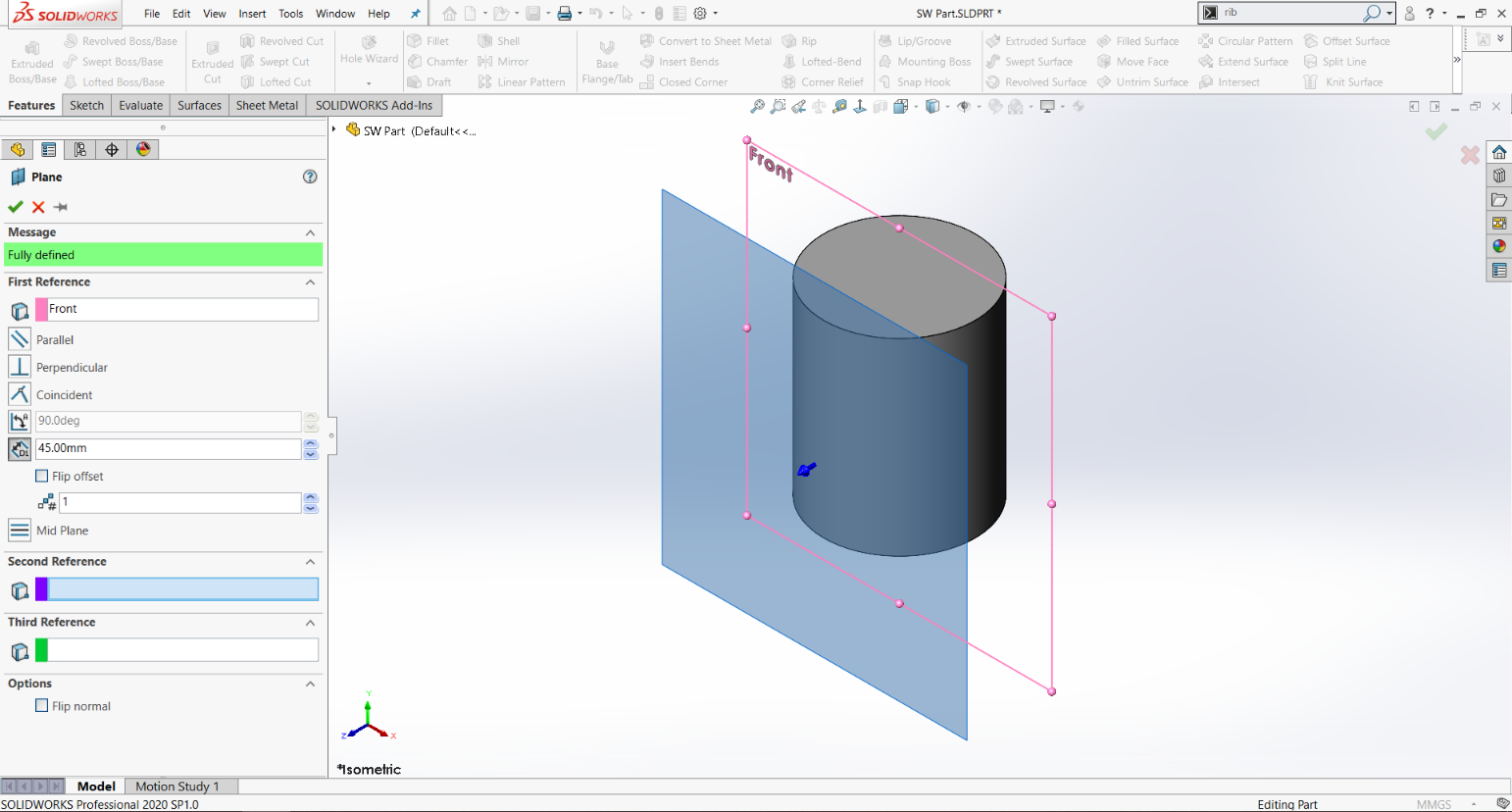 These tools are fairly intuitive to use in both programs (if you’re used to one), but Onshape’s Split tool is much more encompassing. In the Onshape Split tool, you’ll find the Solidworks equivalent of Split-part, Surface-extrude & Cut-with-surface, and of course Split-line to divide faces—all in a single tool. 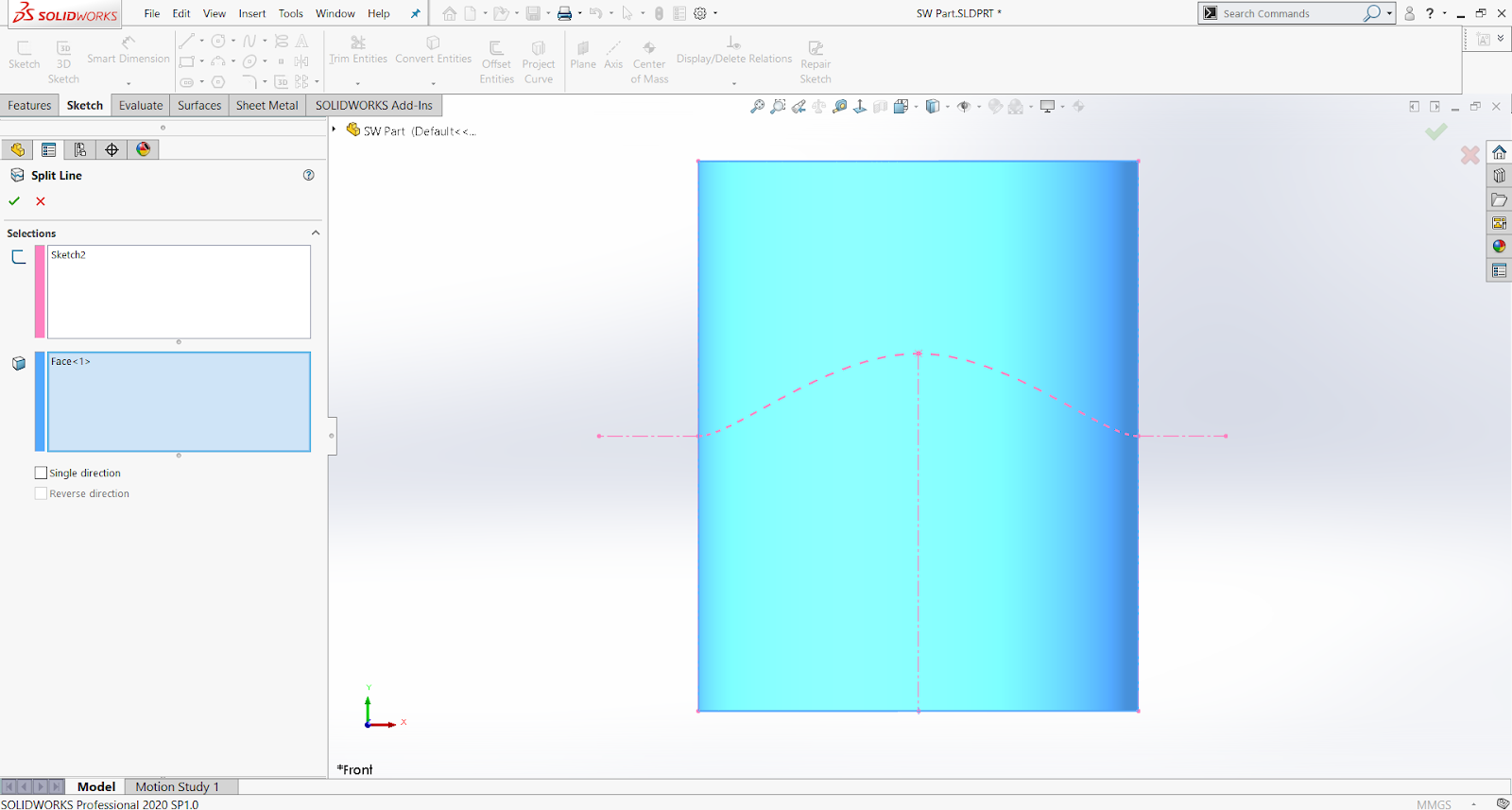 In most ways, the Sweep feature is relatively similar across both CAD environments—you select your profile and your sweep path—but this is also a fine example of a couple key differences between Solidworks and Onshape.

Note the additional degree of flexibility (and options) in the Solidworks menu. This gives the user a little bit more control of the Sweep with guide curves and tangency options but also gives a little more room to break things (and create a feature that just ends up red-lined in your feature tree). Onshape is a little less rich in the feature control but is generally harder to break. 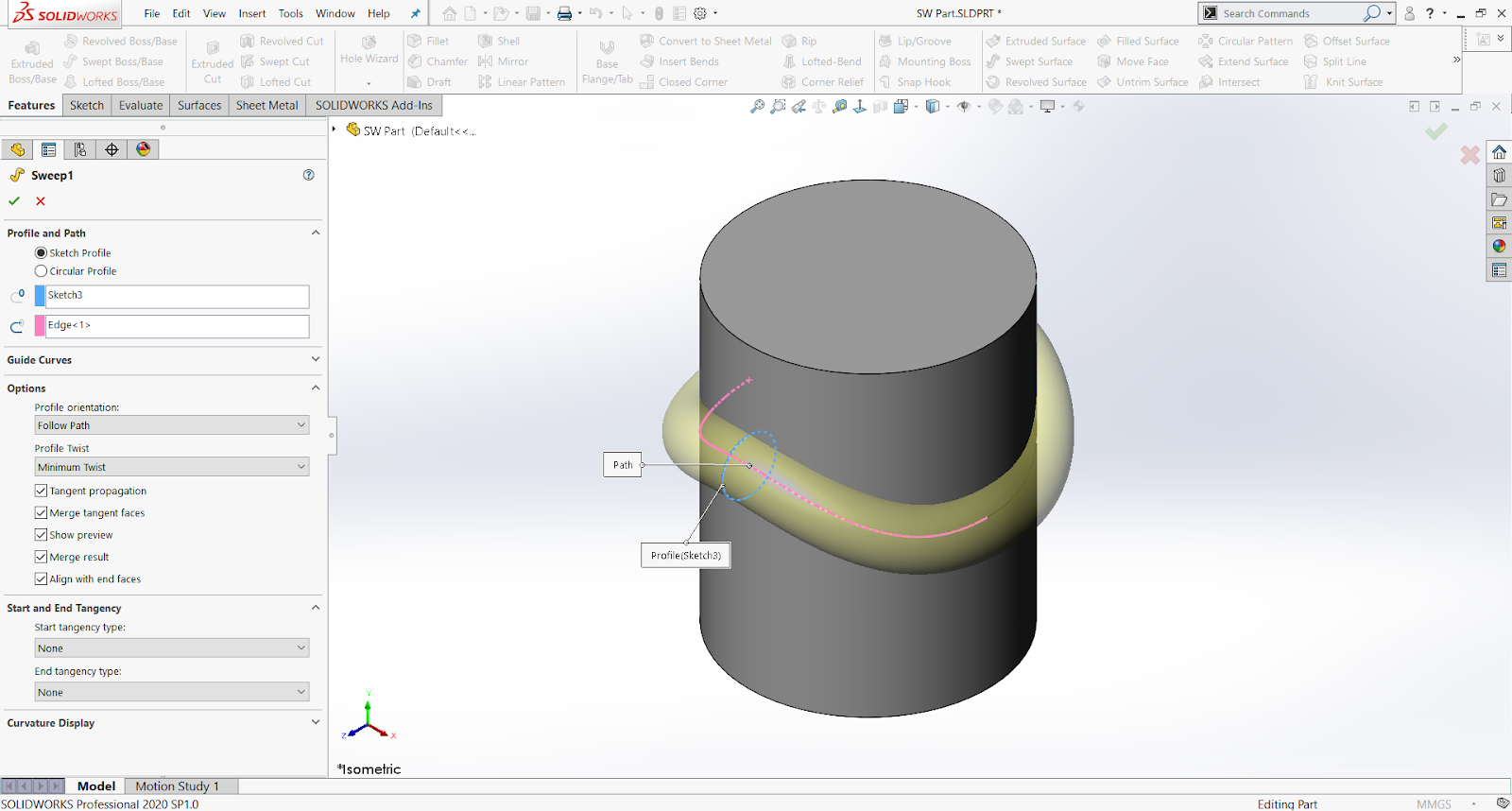 While we’re Sweeping, a neat trick with Onshape is the option to adjust the levels of preview for the feature you are about to add before confirming it. Below is an example of the easy-to-use slider for the “before” and “after”:

The Shell tool seems to work almost identically in both programs and we haven’t noticed a significant difference between the two.

As with many tools, Onshape gives fewer options in its Rib tool. Drafting must be done separately and the initial sketch can only act as the center of the rib extrusion. 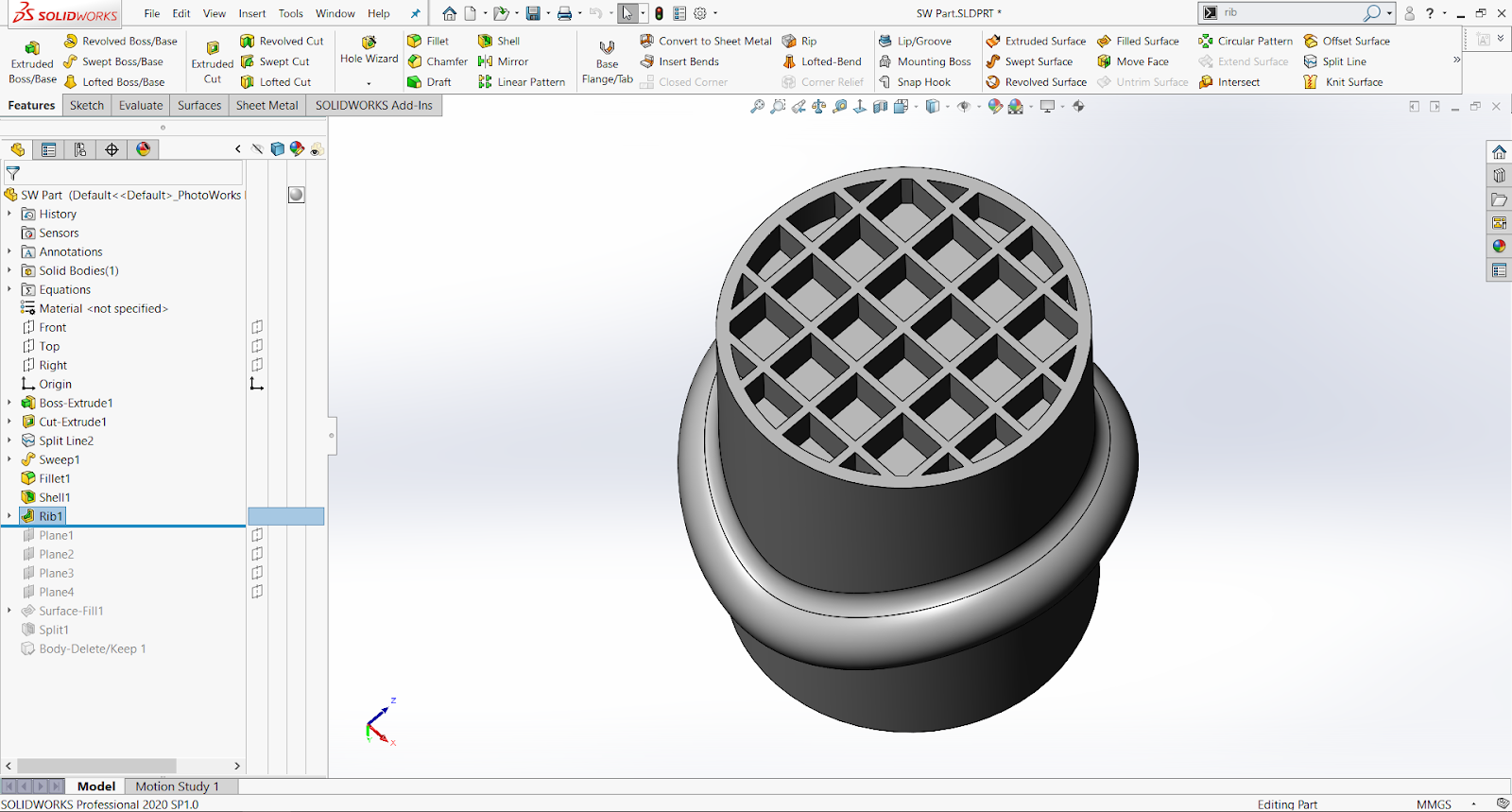 Typically one of the last things in your feature tree, the Fillet tool is similar in functionality across both Solidworks and Onshape. We’ve thrown some weird geometries at both programs and received the same (successful) results. That being said, you get a lot more construction options in the Solidworks menu that allow for slightly more precise filleting. This type of advanced fillet use only exists in maybe 5-10% of the parts designed at BES but it is certainly handy, on occasion, to be able to select intersecting faces.

More importantly, Solidworks’s edge-selection feature for fillets has become indispensable over the years and its use is extremely intuitive. Onshape has a similar “create selection” window that works decently but feels a little clunkier. 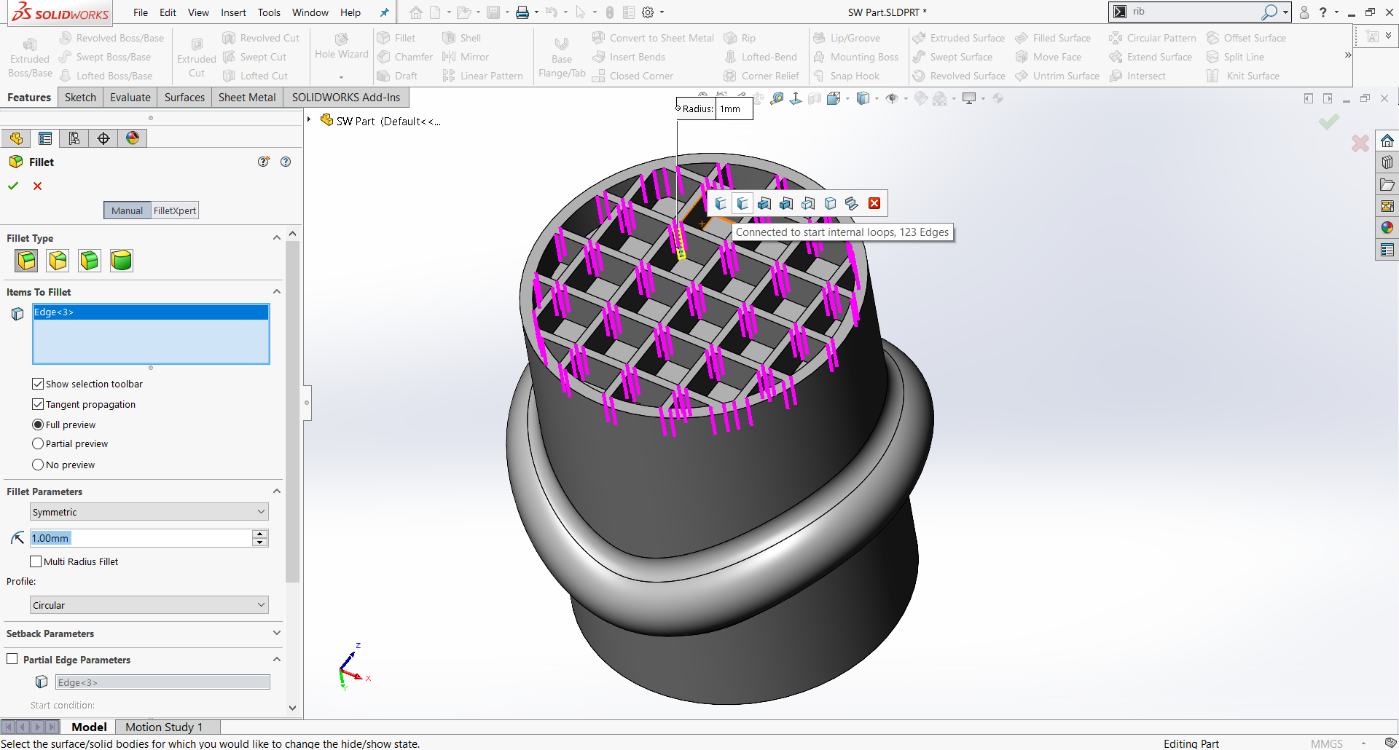 The Surface Extrude tool is similar, although Onshape simply houses it in the extrude window and not a separate tool in the way Solidworks does. 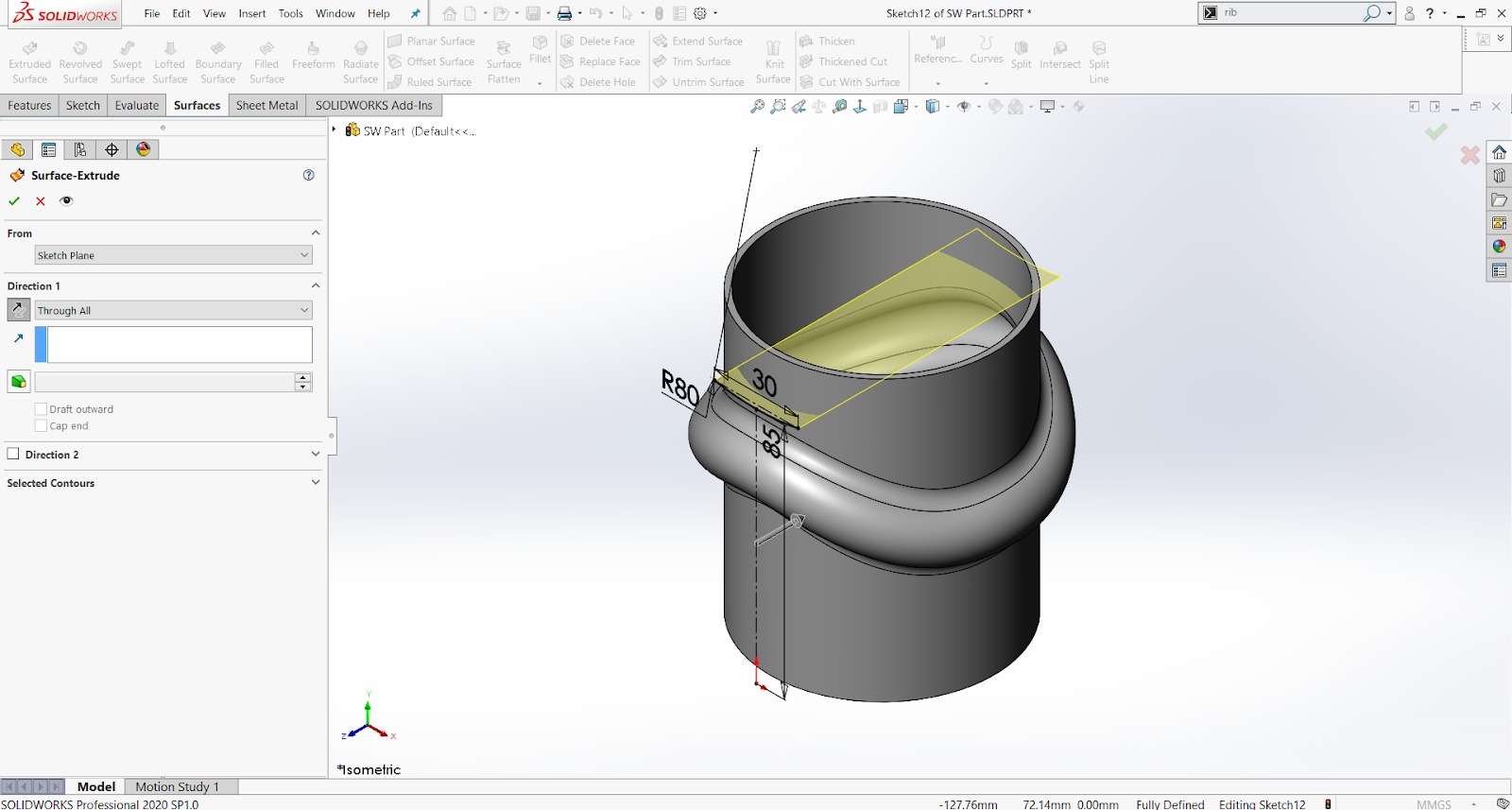 The Split tool reveals an interesting difference. Here, Onshape does an excellent job extrapolating a surface to cut with, where Solidworks will fail to cut with surface unless the surface is outside the entire volume of the part that is being cut. 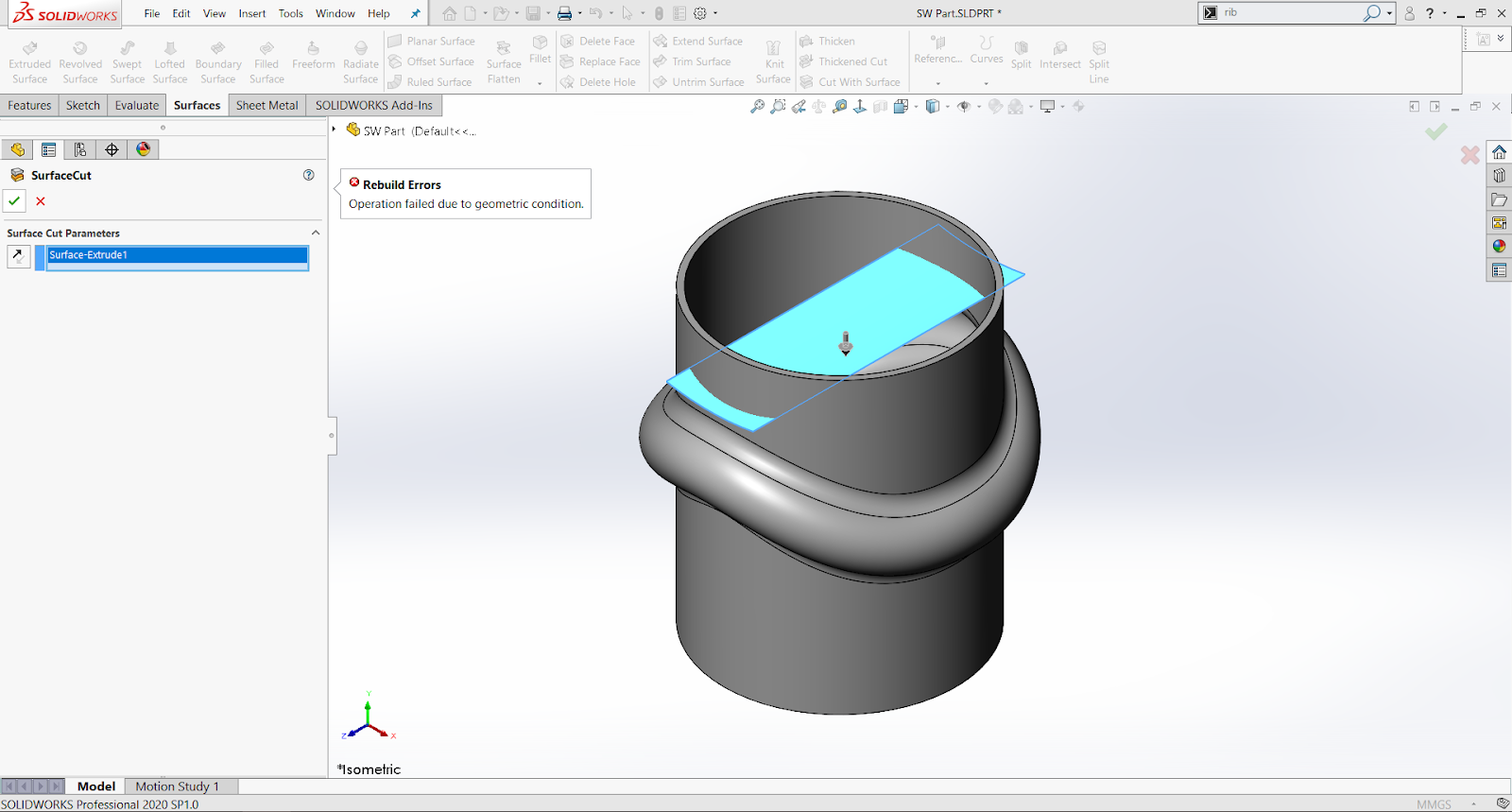 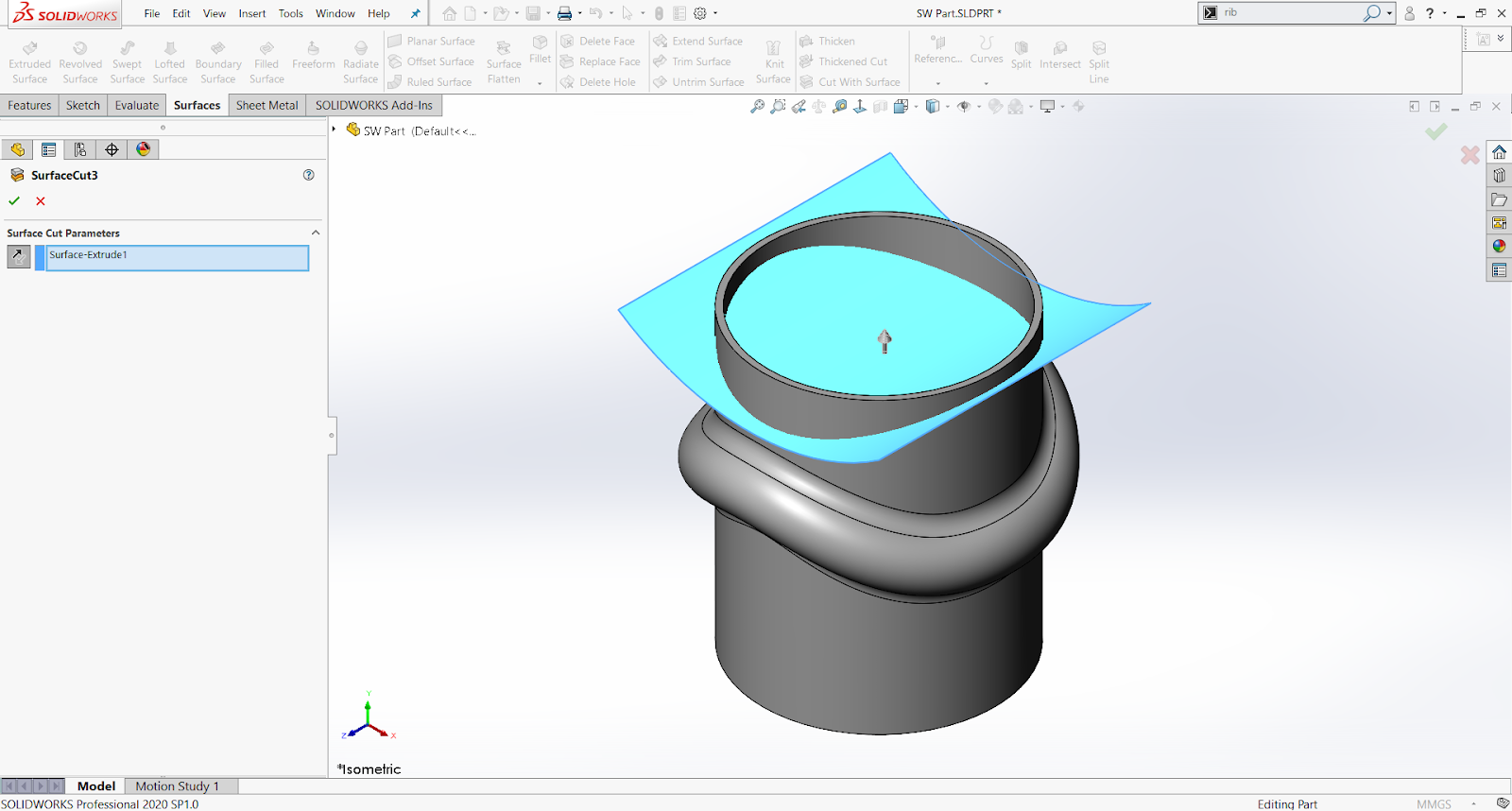 The Measure tool is used all the time and is truly indispensable. The Measure tool in Solidworks is powerful, letting you select points, edges, faces, completely random points in space, section view edges and points, etc. Solidworks measuring also outputs angles and many forms of distances such as normal and standard x, y, and z lengths. Onshape is lacking some functionality and it can be challenging to get a tricky dimension in some random location in a complicated part or assembly. 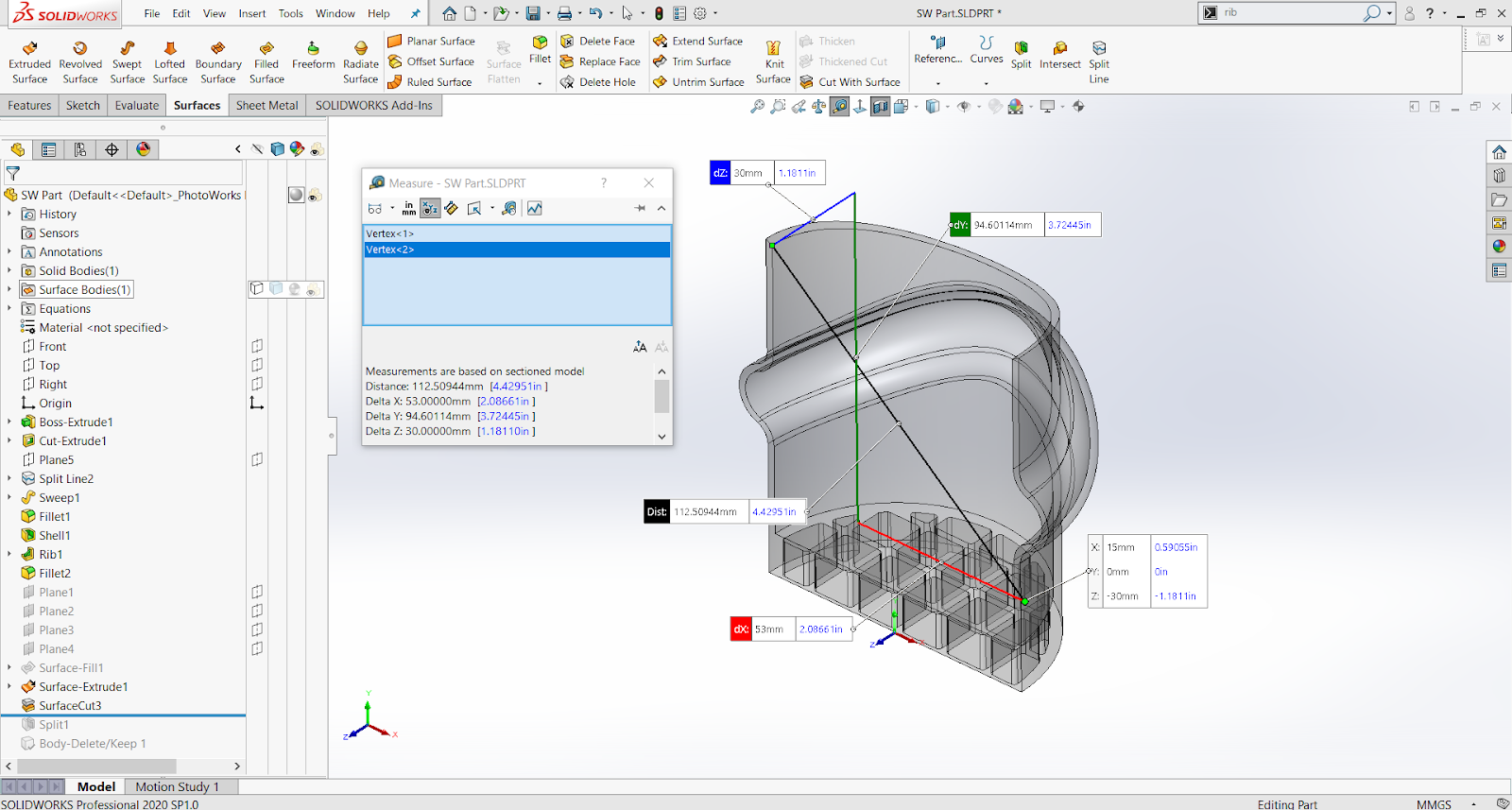 Solidworks can be a very powerful tool, it’s expensive, requires a powerful computer, and can be tricky to become proficient. But, it is hard to replace for detailed analysis-level engineering work. Onshape has a very intriguing proposition: use any computer, collaborate readily with other designers, and still maintain a similar feel and functionality to Solidworks but there are some limitations which can make it a difficult sell for some in-depth design work.

An additional note: Major Solidworks feature updates are infrequent and upgrading can eliminate backwards compatibility with older parts. Onshape appears to be constantly updating and improving and has no known issues with backwards compatibility. We expect Onshape will continue to improve its functionality over the coming years and it will be interesting to see which more powerful analysis tools get included in the future.

Do both programs work with an external 3D mouse?

Can both programs function if you have a power or internet outage?

No, Onshape requires an internet connection.

Which software is easier to learn?

Probably Onshape! The software makes some assumptions and removes some feature options that could slow down new designers. The interface is a bit simpler as well.

Which is better for quick, simple, parts to be 3D printed?

Arguably, Onshape. We work with an engineer who can build conceptual models in Onshape incredibly quickly, but these are typically very basic extruded frames/parts with no draft and no necessary analysis.

I use Solidworks at the office; will Onshape let me do similar designs at home?

Absolutely. Both programs will require a bit of finesse and extra effort to make organic (curvy) shapes, but they are each capable.

How easy is it to move parts between Solidworks and Onshape?

It's easy BUT you can't transfer feature trees. Whereas Solidworks has automated feature recognition to import solids (STEP or IGS) files from other CAD packages, Onshape does not have this capability. When importing from Solidworks to Onshape, you'll get a solid body that can be manipulated with standard tools but won't have dimensions for easily adjusting features that already exist.

I take the bus and want to be able to design during my commute. Which CAD package is better if most of my design time is while on the move?

Which program gives me more bang for my buck?

Probably Onshape, which comes in at around 1/4 of the cost of Solidworks per year for similar functionality. For advanced features that Onshape doesn’t have, Solidworks goes up in price very quickly. That being said, the most affordable base level Solidworks no longer comes with FEA simulation capabilities.

Are my documents in Onshape private?

Can I run both programs on a Mac or Linux OS?

You can easily run Onshape in almost any modern browser, so Mac and Linux computers are well equipped! As for Solidworks, you’re best off sticking with a Windows PC or something already running a stable Windows installation—we’ve done this with iMac computers but don’t necessarily recommend it.