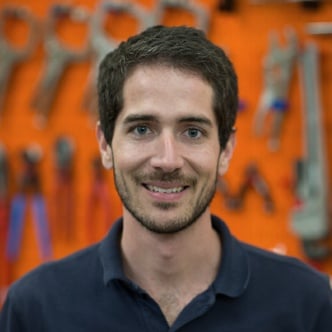 MOSFETs (metal-oxide semiconductor field-effect transistors) are heavily used in a most of the electronics we use every day. When looking at it from a sheer numbers perspective, the vast majority are contained within what is known as an integrated circuit. These parts can contain anywhere from hundreds to billions of the devices on a single chip and perform a myriad of different functions. This article however focuses on a single discrete component.

The basic function of a MOSFET is to act like a switch, making or breaking a connection with an electronic circuit. MOSFET’s are analogous to a switch on a wall, but instead of using a mechanical means to turn it on, MOSFETs are turned on with an electrical signal. Their applications range from controlling small lights and LED’s all the way up to large industrial motors.

Selecting the right MOSFET for a design can be a daunting task, as there are several parameters which manufacturers publish that are inherent to the parts design and construction. Below is a list of the key parameters to keep in mind when choosing a part:

Max drain to source voltage is the rating given to the parts ability to block voltage applied to it when it is off. A good rule of thumb is to choose a part whose voltage rating is twice that of the expected voltage applied to the drain. Reasoning behind this is that short voltage spikes well above the input voltage are common in electrical systems where switching MOSFETs are present.

Drain to source resistance is an important parameter as it will dictate how much heat is being generated by the device while it is conducting. One critical thing to keep in mind is that the Rdson in the datasheet is specified at a certain gate to source voltage and temperature, so differences in either of these will result in different Rdson values.

Maximum DC drain current quantifies the maximum current a device can withstand indefinitely given adequate cooling. This rating can be a bit deceiving as it isn't always a guarantee of device reliability. Depending on the Vds, the device may only be able to conduct a small fraction of this current before failure. The only way to be sure the device can withstand the desired current is to refer to the safe operating area curve in the devices datasheet. 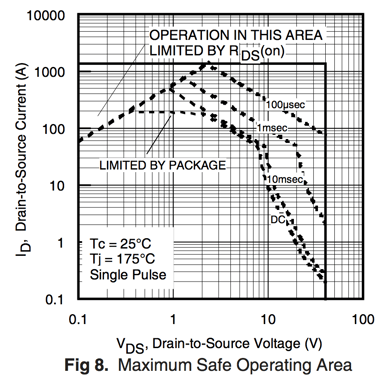 Gate voltage threshold is the voltage at which the device will begin to conduct. Full on conduction will generally occur at a higher gate voltage, refer to the voltage where the Rdson is specified for a more accurate picture of where the device is ideally operated at. This parameter is important depending on what voltage is available from the MCU or gate driver.

Gate charge refers to the amount of charge that needs to be input to the gate for the device to turn full on. This parameter is critical in designs where a high switching frequency is used as it has a direct correlation with the amount of switching loss the part will see. The lower the Qg of a MOSFET, the more efficient a high frequency switching application can be.

The MOSFET package/case should be selected based on the mechanical and thermal requirements of the design. Depending on the board space available or the physical layout, certain packages are a better choice over others. Also, the package type typically affects the thermal resistance from the MOSFET silicon to the thermal interface (commonly referred to as the thermal resistance from the junction to case) itself where a heatsink would be mounted. This can be a critical parameter for thermal performance in high current or high power dissipation designs.

The end design will ultimately dictate which of the parameters listed above are the most critical to achieve the desired performance. As with most decisions in the engineering field, there are tradeoffs when selecting a MOSFET for a design. One part will offer great performance for a certain parameter, but may be giving up performance on another. It is best to establish a list of priorities and use that to narrow down to the part which will be a good fit.