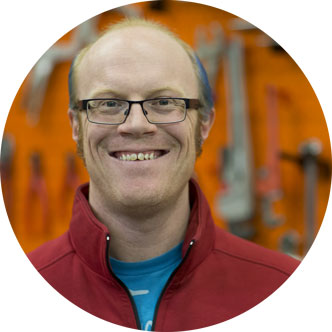 When we set out to design a new product, we want it to function as intended for as long as possible or perhaps for at least a specified period of time - number of uses, miles driven, etc. We have all experienced the frustration of having something break unexpectedly and perhaps with only little use. Usually, with mechanical components, we see a piece broken off, cracked, or shattered, which forces the entire component (or the larger product) to be replaced. In the case of safety-critical items, such as vehicles, bridges, or anything else which might cause damage or injury if it fails in service, understanding types of failure is vital. A particular type of failure, the phenomenon whereby a part weakens over time due to internal damage accumulated over time, is known as ‘fatigue’. Fatigue-related failure has plagued engineering since time immemorial and has often been the cause of terrible accidents and very expensive redesigns. Prediction/modeling of and design for fatigue life is an often-overlooked or under-valued aspect of product design.

Though fatigue-related failures have been an issue throughout the history of human use of metals, the topic became formalized in the 19th century as steam power led to the widespread use of iron parts in machinery. It was soon discovered that these parts, such as chain links, axles, etc. had a nasty tendency to fail catastrophically without warning even when seemingly over-designed and subjected only to the intended loads.

A famous railway incident in 1842 involving a French passenger train was caused by the brittle failure of a locomotive axle causing a derailment of the train[6] and many fatalities. This is often considered the beginning of formal investigation into the topic, though some earlier work in the field had been done in the mining industry. By the late 1800’s it was well-established that iron parts could fail in service at loads of 50% or less of their single-use strength. Railway accidents due to metal fatigue failures were depressingly common at this time.

The exact behavior of a part subjected to repeated cycling loads depends on the material, but generally metallic parts will flex under load and may at some point suddenly fracture and fail catastrophically. Plastic parts have a greater tendency to creep, which is where slow deformation in the material due to applied loads causes the structure to gradually deform permanently until the material either fails completely (breaks) or becomes so deformed that the part no longer functions as designed. In the case of plastic parts exhibiting creep, the load may not be time-varying, but sufficiently high to cause slow material deformation over time. It is worth noting that metal parts (particularly those made of Aluminum) also exhibit this behavior, though it is less common than with plastics.

When designing a product or component, we should choose the best material possible to make the parts from such that they are guaranteed to last as long as required. To do that we have to know a few things about how various materials behave when loaded statically and cyclically. Since most modern engineered products use primarily metals or plastics, and understanding the behavior of metallic materials necessarily precedes that of most other material types, this post will focus on fatigue of metals. Composites also have fatigue behavior, but that is a complex topic which is best left until after a full understanding of linear-elastic (metals) and viscoelastic (plastics/rubber) material fatigue behaviors is obtained.

It is not uncommon for parts in modern machine designs to experience tens to hundreds of millions (107 to 108) of reversing load cycles in a regular service lifetime. The failure mode exhibited by metallic parts in fatigue is often sudden and complete failure once a particular set of conditions are reached. These conditions often cause a small crack somewhere in the material to suddenly propagate across the entire part. Obviously, this can be a catastrophic condition, depending on the nature of the failure. One well-known example of a sudden fatigue failure is when the connecting rod between the piston and crankshaft in a car or truck engine cracks and breaks, which generally destroys the entire engine mechanism.

Any mechanism subjected to high repeating loads or constant continuous vibration is potentially vulnerable to sudden, catastrophic fatigue failure. Understanding this type of failure was one of the most fundamental issues which had to be solved for modern aircraft designs. For instance, the fan and turbine blades inside jet engines spin at ridiculous speeds (as many as 1000 revolutions per second) and are subjected to extreme mechanical and thermal loads. Failures of any of these parts due to metal fatigue nearly always destroy the entire engine and can spray the parent aircraft with high-velocity shrapnel, which is generally considered a very bad outcome.

A famous and tragic example of a severe fatigue-related jet engine failure occurred in July of 1989, when United Airlines Flight 232, a DC-10 airliner, experienced a failure of a fan disk in the center tail-mounted engine. The disk (shown above) cracked and the resulting explosion of shrapnel destroyed most of the hydraulic flight controls in the tail assembly, rendering the aircraft nearly impossible to fly. The pilots were able to nurse the big jet to the airport at Sioux Falls, Iowa, but were unable to control the aircraft sufficiently to land it safely. Of the 269 passengers on the aircraft, 112 survived. The investigation into the accident determined that an undetected material flaw within the Titanium fan disk led to a catastrophic fatigue crack[3].

Serious fatigue issues can also occur in parts which do not appear to move much, but still experience vibration loading. This type of failure is not as familiar to us today because of extensive development in materials science and engineering analysis techniques which have allowed designers to largely mitigate the likelihood of a relatively static (or seemingly static) part failing in fatigue. Unfortunately, this knowledge came at a considerable cost, primarily due to calamities which occurred in the surface structures of flying aircraft, which have frequently been made of aluminum--aluminum is particularly vulnerable to fatigue damage.

The very first commercial jet-liner, the De Havilland DH-106, was originally designed with large square windows in the passenger compartment. Within a few years of entering service, three separate aircraft broke apart in flight, killing everyone aboard. After investigation, two of these failures were found to be due to metal fatigue of the aluminum aircraft skin from cracking around the corners of square windows and improper riveting - this is the reason that all modern jet aircraft use small, oval-shaped windows[4].

An eerily similar aviation accident caused by metal fatigue occurred in 1988 when Aloha Airlines Flight 243, a Boeing 737, lost a significant amount of the aircraft skin in flight over the Pacific Ocean, causing explosive depressurization and the death of a flight attendant. Fortunately, the pilots were able to land the aircraft safely, and the investigation found that the failure was due to a crack in the Aluminum aircraft skin caused by corrosion in the metal from salty conditions[5].

The basics of understanding fatigue design begins with an examination of what is known as the stress-strain curve for a material and some background information about the material’s internal structure. All materials exhibit a characteristic response to an applied load, which is often tested by pulling on or compressing a sample of the material in an instrumented force machine (Instron is a common brand name of this equipment) which measures the force required to stretch the material a given amount. The results of pulling the sample to failure are shown below for a typical ductile metal sample (such as steel, copper, aluminum, etc.). The stress (𝞼) is the applied force vs. the size of the material carrying the force (basically the internal pressure inside the material), while strain (𝞮) is a measure of how much the part has deformed, as a percentage of the new, deformed length vs. the original length. 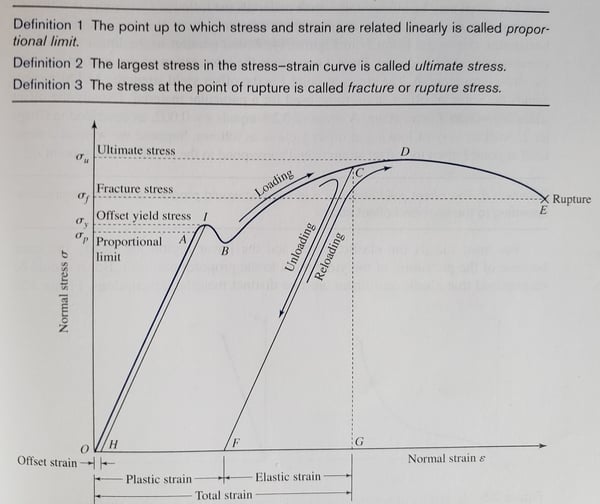 As the applied force increases, the part begins to deform, but at first the deformation is completely linear and reversible for most materials (O to A above), which is called the ‘Elastic’ region. The slope of the line in the Linear/Elastic region defines an important material property, Young’s Modulus. The strength beyond which permanent deformation occurs is the Yield Strength, another extremely important material property. For parts used only in the Elastic region, the Modulus and Yield parameters are sufficient to describe the material, with one major restriction - the material must be isotropic, meaning it is identically strong in all directions, a condition which ductile metals do in fact, obey. Other materials, especially composites (and some polymers or 3d-printed materials) do not obey this condition, and thus require more information to model correctly.

The plot above shows the response for a material undergoing first elastic, then plastic deformation with increasing load. As the stress, 𝞼 increases, the strain 𝞮 also increases. When the load is removed, the applied stress is reduced to zero, but the applied strain energy does not always return to zero. Instead, if the sample has been loaded beyond the elastic region (O-A) and plastically deformed (A-C), when the load is removed, the strain will return to point F (plastic strain then being from H-F, and elastic strain which is recovered from F-G). For loading within the proportional limit, the strain will recover to somewhere within the 0.2% offset strain (O-H). Even for situations involving bulk stress levels below the material yield strength, this same phenomenon will occur in some isolated areas within any real material due to the way the microstructure transmits and concentrates force within the material.

Essentially, as the material is cycled with repeated load, the total strain energy slowly increases. This can have any of several very significant effects on the material properties. In the case of metals, the material modulus may increase due to cold-working while making the material more brittle (the slope of the O-A line in the stress-strain curve becomes much steeper), so the part will deflect less under the same load, but will still fail at a similar (or possibly reduced) stress level. Another very important detail is that metals often become more brittle at low temperatures, and more ductile at high temperatures. Other more viscoelastic materials, such as rubber, may simply deform irreversibly (known as creep), or have other (often temperature dependent) fatigue behaviors. The overall effect of both reactions is to reduce the effective strength of the material as the part is cycled to higher counts.

To understand these results, we will have to delve into the molecular structure of various materials and really get beneath the surface. Stay tuned for our next blog on material fatigue and fracture behavior!